The most recent episode is always located here on our Podcast Page. If you are a new listener and want to know where to begin, please click on the New Listener link in the menu bar.

Featured in tonight’s cast were (in order of appearance):

To keep up with the latest news and information on everyone's favorite private investigator, visit our Facebook page at facebook.com/harrystrangeradio. Send your questions, comments and suggestions to producer@harrystrange.com

The producers, cast, and crew of the Harry Strange Radio Drama would like to thank the following people for their support and encouragement throughout the years:

The biggest thanks of all goes to our listeners:Thank you for an incredible three seasons!

For the Harry Strange Radio Drama, I am JoAnn Pruden. Goodnight and keep listening to audio drama.

Check out our latest episode!

Posted by Tony Sarrecchia at 12:00 PM No comments: 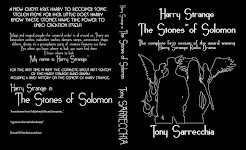 In order to support the Harry Strange Radio Drama and assist in offsetting future costs, I have released the first season scripts in book format. By purchasing a print or Kindle copy, you not only get 400 heart-pumping pages of bourbon soaked, supernatural goodness, but you are helping with the cost of getting into a studio, feeding the actors, and enhancing the production value of future episodes.

“Harry Strange in The Stones of Solomon” begins when Lilith first hires Harry to search for her lost artifacts and follows through his adventures in the first season including his origin story and the introduction of the creepy Mr. K.

So go ahead and pick-up a copy for you, your neighbor, and your local library. We appreciate your support!